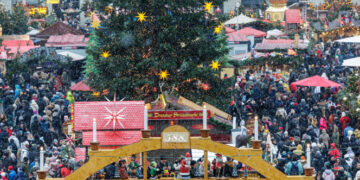 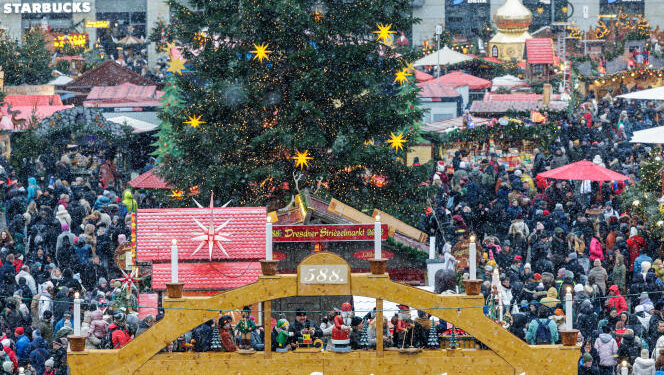 Partial view of the stands at the Dresden Striezelmarkt Christmas market in Dresden, eastern Germany, on December 10, 2022, after it reopened after a large-scale police operation had been launched due to a suspected hostage situation earlier in the day. (Photo by JENS SCHLUETER / AFP)

A prominent German economics research institution predicts that the looming recession in Germany will be more mild than expected, with Europe’s biggest economy forecast to shrink by only 0.1% in the coming year.

The downturn will hit over the winter, with output shrinking in the final quarter of 2022 and the first quarter of 2023, said Timo Wollmershäuser, head of forecasting for the Munich-based Ifo Institute for Economic Research. But after that, “things will start to pick up again.”

The German government’s scheme of subsidies to offset high fuel and electricity prices will likely help bring down the inflation rate from 7.8% this year to 6.4% next year, according to the group’s forecast.

The forecast is a marked improvement from earlier this autumn, when economists had predicted inflation to continue rising into next year and hit 9.3%.

Third quarter economic performance in Germany was “much better than expected” with 0.4% growth, said Wollmershäuser. The Ifo Institute now expects full-year economic growth in 2022 of 1.8% instead of their previous prediction of 1.6%.

The institute forecast that, over the winter months, high inflation will cause real income to fall for households in Germany and cause the economy to cool down as Germans cut back on spending.

“It is not until the second half of the year that incomes are expected to increase more strongly than prices, and private consumption is therefore likely to pick up,” the institute said.

The improved forecast suggests German economic output will shrink by 0.1% in 2023 instead of the decrease of 0.3% the group had predicted in the autumn.

The institute also predicted that job growth in Germany will come to a standstill over the winter half-year and employers are expected to cut hours by temporarily expanding the use of short-time work.

The forecast sees the unemployment rate in Germany rising from 5.3% in the current year to 5.5% in the coming year.