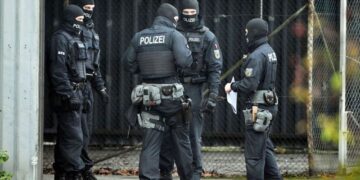 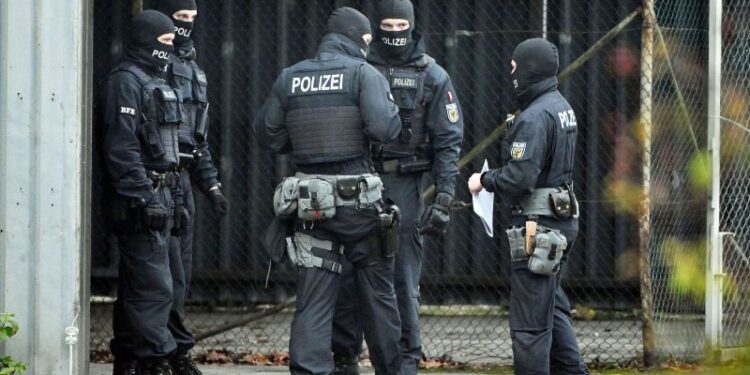 Hooded police officers stand guard outside the Federal Court of Justice. The Federal Prosecutor's Office had several people from the so-called Reich Citizens scene arrested in the course of a raid on Wednesday morning. Photo: Uli Deck/dpa

German prosecutors have initiated proceedings seeking the extradition from Austria and Italy of two men arrested during raids this week targeting members of the right-wing extremist Reichsbürger (Reich Citizens) movement.

It was not yet clear on Friday when the two individuals could be brought before the investigating judges at Germany’s Supreme Court.

Earlier, German lawmakers called for Bundestag security measures to be ramped up following the raids.

The 25 suspects, including a former member of parliament, arrested in Wednesday’s raids allegedly sought to overthrow the democratic order and install a new government, according to a statement by the public prosecutor’s office.

Prosecutors said that the key suspects belonged to an unnamed terrorist group linked to the extremist movement, which does not acknowledge the existence of the German state.

Among the arrested is Birgit Malsack-Winkemann, a former parliamentary member of the far-right Alternative for Germany (AfD) and a sitting Berlin judge.

Pointing to the former lawmaker’s affiliation with the AfD, which currently has 79 seats in parliament, Bundestag vice president Katrin Göring-Eckardt told the newspapers of Germany’s Funke Media Group in comments published on Friday: “We will carefully examine for the Bundestag which security measures we need to adapt and address the issue in all decisive bodies.”

As a former lawmaker, Malsack-Winkemann had access to the Bundestag buildings, as do all retired deputies.

“After the arrest of a former AfD member of parliament who wanted the Bundestag to be stormed, her existing contacts in parliament must be urgently checked,” Social Democrat deputy Sebastian Hartmann also told the the Funke Media Group, calling for the parliament’s security to be re-evaluated.

The parliamentary group vice chairperson of the Free Democrats (FDP), Konstantin Kuhle, called for a review of access to the Bundestag for all former AfD lawmakers.

“The events surrounding former AfD lawmaker Birgit Malsack-Winkemann, who was arrested on Wednesday for her possible involvement in terror plans, make it necessary to re-examine access for former AfD legislators,” the politician told dpa on Friday.

Kuhle suggested that the Bundestag administration should check in each individual case whether other former AfD deputies had also received new information from the security authorities that might indicate a threat to the parliament and its properties.

Should this be the case, a ban on entering the parliament should be imposed immediately, he said.

The institutions of democracy must be protected from attacks by extremists, he added. “It would be intolerable if former AfD lawmakers enabled such attacks by entering parliament.”

In remarks on Thursday, German Chancellor Olaf Scholz described the alleged involvement of a former lawmaker as “very bad,” but stressed that possible consequences were now a matter of “autonomous decisions by the federal and state constitutional protection authorities, each of which weighs the matter on a legal basis.”

ADVERTISEMENT
Adverts:- Land for Sale at Oyibi, Adenta, Ayi Mensah, Oyarifa. House for sale at Spintex, Oyarifa - CLICK HERE
Tags: Austria and ItalyBundestag security
Do you have any article or news or story leads? Let Awake News energize that story for you. Send them to editor@awakenewsroom.com or WhatsApp: +233249155003 ========================