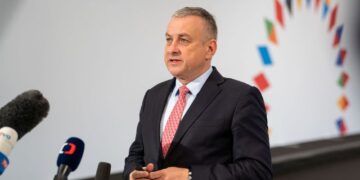 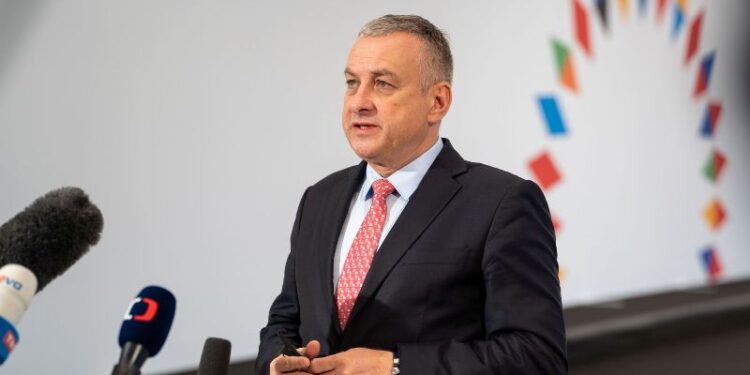 FILED - Czech Minister of Industry and Trade Jozef Sikela speaks to media, ahead of the European Union Energy Ministers Informal meeting in Prague. Photo: -/European Council/dpa - ATTENTION: editorial use only and only if the credit mentioned above is referenced in full

European Union energy ministers are under pressure to agree on a cap for the wholesale price of gas, putting sceptics like Germany at risk of being outvoted.

“I am targeting to have an agreement as of the end of today,” said Czech Industry Minister Jozef Sikela, who is chairing the talks.

He said one way to end the months-long dispute between EU countries about how to tackle high energy prices was to put a compromise proposal to vote, rather than seeking unanimous support.

“That would of course be an outcome that is not desirable,” said German Economy Minister Robert Habeck, insisting that Germany’s concerns are well-founded. “Nobody, last of all me, has anything against low prices on the gas market,” Habeck said.

“We just know from previous market interventions that we have to be very careful not to want the good and trigger the bad.”

EU leaders called for a compromise by Monday after ministers had failed once again last week to settle the dispute as several crucial points remain contested.

Current debates are based on a European Commission proposal to cap the wholesale price of gas for some futures traded on the Dutch reference hub Title Transfer Facility (TTF).

Ministers however still need to agree on the threshold the wholesale gas price would have to exceed for the mechanism to kick in and on how to calculate the regulated price once the cap is activated.

A potential compromise could entail lower price thresholds to trigger the measure than initially proposed but also more safeguards aimed at easing Germany’s concerns and ensuring security of supply and the stability of financial markets.

“These are concerns that we all share. It’s not a concern of Germany alone,” said Belgian Energy Minister Tinne Van der Straeten, a vocal supporter of the gas price measure, adding that “huge progress” has been made to address these issues.

“When crunch time arrives, I’ve always seen the member states come together and try to achieve a compromise that can keep all the member states together,” said Maltese Energy Minister Miriam Dalli, another supporter of the cap.

Caught up in the dispute over the wholesale gas price cap are also decisions on other legislation aimed at tackling the consequences of Russia strongly decreasing its energy exports to the bloc.

Other proposals pending the approval of EU energy ministers include making joint gas purchases operational, increasing solidarity between member states in case of energy shortages and speeding up the permitting procedures for some renewable energy projects.