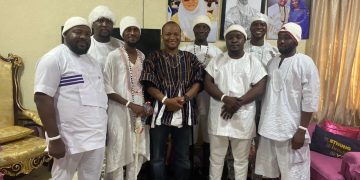 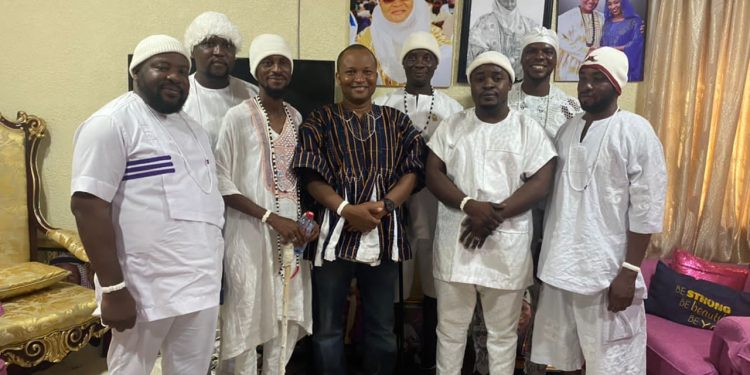 A team of Wulomei From the Nungua Traditional Council led by Oofu Wulomo and Gborbu Laabia have paid a courtesy call on the Sempe Muslim Akwashongtse, Nii Adotey Odaawulu I to congratulate him on his one year anniversary at his palace in Accra.

The visit was also to commend the Sempe Muslim Akwashongts3 for his love and the way and manner he handles GADANGME issues as well as the good works he is doing for all.

The selected Wulomei extended felicitations from Gborbu Wulomo and prayed for him to achieve more and be the shining star for all.

On his part Nii Adotey Odaawulu I thanked them for the honor done him and promised to do more and advocated that the youth should be given more education since that is the way to go.

The Sempe Muslim Akwashongtse, Nii Adottey Odaawulu I on April 4, 22 celebrated his one year anniversary as the Chief Justice of Sempe Muslim Traditional Area.

He is first to be installed as the Sempe Muslim Akwashongtse on April 4th, 2021, following his hard work, peace loving, dedication, commitment and support to his community.

The people of Sempe and GaDangme expressed joy over the positive change and progress the Sempe Muslim Akwashongtse has brought within some towns and villages.

Many were those who described the Sempe Muslim Akwashongtse as a philanthropist and humble, with the heart of Gold.

As part of his efforts to ensure massive progress and unity within the Ga state has single handedly sponsored events that seek to bring the people of Ga Dangme under one umbrella for the purpose of unity and development.

The Sempe Muslim Akwashongtse has also come out with initiatives that seek to support the basic needs of the less privilege in the society and has as well marked his date of birth as a day of party for the less privilege.

He has also help in bringing out the talents in the youth of Ga Dangme through financial support for boxers, footballers, horse racing and other sporting disciplines.