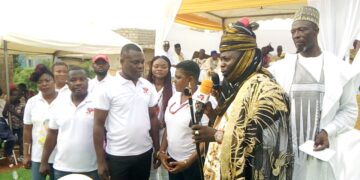 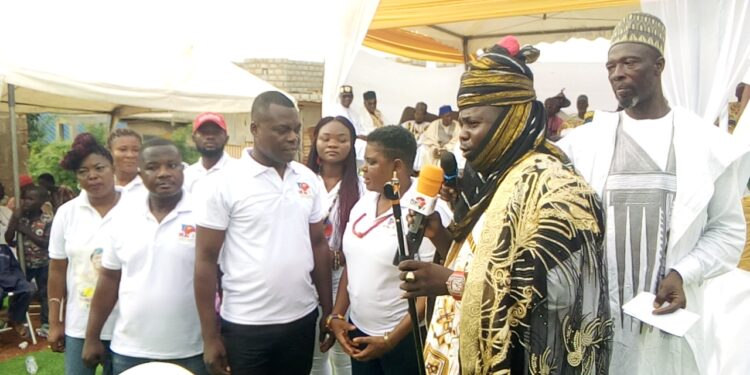 Over 50 non-Muslims personalities on Saturday, November 5 2022, joined the Muslim faithfuls to celebrate Maulud which signifies the Birth of Prophet Muhammad.

The event which was organized by the Hausa Chief of Ablekuma Agape/Gonse, Emir Sheriff Adam and under the auspices of the National Chief Imam of Ghana, Sheikh Osumanu Nuhu Shaributu and the Zongo Chief of Ablekuma Joma, Sarki Musah Nso attracted prominent members from different faith, political parties representatives, traditional and Muslim Chiefs as well as Imams.

The event was also aimed at bringing Muslims, Christians and other faith together to strengthen religious tolerance in Ablekuma Agape/Gonse in particular and the country at large.

The President of United Nations Youth Association Hon. Kobina Adomadzi Longdon called on Muslims especially the youth to continue to anticipate the deeds of the Holy Prophet Muhammed.

He urged the Chiefs, imams and opinion leaders to direct their subjects to take advantage of technology as it has become more efficient and will be in existence for a very long period of years.

He added that the current nature of jobs the youth are engaging in will not be there tomorrow as technology has taken over and further called on the youth to venture into graphics designing and computer programming.

On his part, the Greater Accra Zongo Chief, Sarki Dr. Yahya Hamisu Bako commended the Hausa Chief of Ablekuma Agape/Gonse, Emil Sheriff Adam for organizing the first ever Maulid celebration in Ablekuma Agape/Gonse community to bring together both faiths (Muslim and Christian) to meet, interact and exchange goodwill messages for the development of his people.

Sarki Dr. Hamisu Bako stated that the first Maulid celebration in Ablekuma Agape/Gonse would foster peace and unity among both faith and will as well bring development.

The Hausa Chief of Ablekuma Agape Gonse who doubles as the UN representative on Chieftaincy Affair, Emil Sheriff Adam called on all religious organisations to embrace religious tolerance to enhance national development.

The Hausa Chief of Ablekuma Agape/Gonse expressed his commitment to seek to the welfare, development, peace and unity of his people and generation yet unborn.

He said more events will be held to bring all religious body and organizations in the Ablekuma Agape/Gonse and other neighboring towns under one umbrella to deliberate on how to maintain the peace and togetherness the people are enjoying.

He expressed his profound gratitude to the Municipal Chiefs Executive, Hon. Patrick Brako Kwesi Kumor who made donation of 2,000 Ghana Cedis.

He further expressed gratitude to the Traditional Chiefs, the Christian community, other faiths in Ablekuma Agape/Gonse, the Council Zongo Chiefs, the National Chief Imam and Dromo Foundation for honoring his invitation to straighten the relationship between both faith.

Emil Sheriff Adam described the well attended event as just a launch and expressed hope that next year will be greater as invitation will be extended to all within the Ablekuma Agape/Gonse and other neighboring communities.