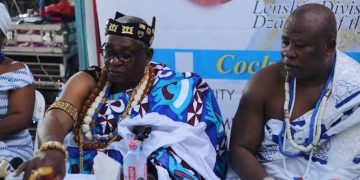 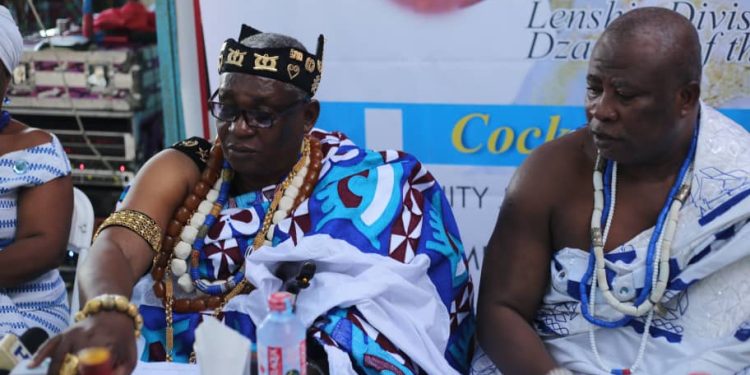 Nii Ashikwei Kwaobotwe, the Dzasetse of Teshie Paramount Stool and Divisional Chief of Lenshie has on Saturday 7, May 2022 celebrated his 15 years jubilee anniversary at the Trinity Junior High School, Teshie in Accra.

The 15 years jubilee anniversary brought together Chiefs, political party representatives and other traditional rulers from various parts of Accra.

Addressing the gathering, Nii Ashikwei Kwaobotwe revealed that 15 years of sitting on the royal stool comes with many opportunities and challenges adding that the good Lord have lead him through the past 15 years without any scratches.

He expressed his gratitude to the good people of Teshie for their support for him all these 15 Years as the Dzasetse of Teshie and making time to join him in celebrating this very important milestone of his stewardship as the Divisional Chief of the Lenshie and Dzasetse of the Teshie Paramount Stool.

According to him, during his installation rites on 3rd May, 2007, he made a solemn pledge to the Kingmakers and the people that he will ensure that a worthy royal is put on the vacant Teshie Paramount Stool.

This he said has been fulfilled with worthy royal in the person of, His Royal Majesty Gbetsoolo Nii Ashitey Akomfra III, the Paramount Chief of the Teshie Traditional Area and Member of the Greater Regional House of Chiefs.

Nii Ashikwei Kwaobotwe over the past 15 years, have worked with key stakeholders to salvage and restore the vandalized Teshie Mantse Palace for official use and has provided 2-storey ultra-modern Office Complex for the Teshie Mantse which is expected to be completed before Homowo 2022.

He also supported the rebranding of the Teshie Homowo Festival and other social intervention projects such as the Akro Foundation, the Akro Excellence Awards Scheme and the Teshie Oblantai-a-Mannye Pageant and the INCUTRAG.

He ensured that almost all the Teshie Traditional Houses have been rehabilitated and refurbished to enviable standards.

Outlining his challenges for the past 15 years, he revealed that a group of disgruntled elders and chieftaincy contractors who exploited the 30 year interregnum for their personal gains are unwilling to let go their strangle hold on the echelons of power in spite of several Court Injunctions and admonishments from the Houses of Chiefs hierarchy.

This group of detractors he said, have made it their business to cause mischief by holding needless press conferences and other diabolical activities adding that another herculean task facing the Stool is the problem of youth empowerment and entrepreneurship.

“tatistics show that the worldwide ocean economy is valued at around $1.5 trillion per annum, making it the 7th largest economy in the world”

“Again, the total value of ocean assets (natural capital) has also been estimated at $24 trillion. Therefore why has it become so difficult for Teshie being a coastal town, to benefit from this a huge opportunity to boost economic growth and tackle unemployment and food insecurity and poverty?” He asked.

“According to Greenpeace maritime research sources, the operations by foreign trawlers, mainly from China and Europe, have cost West Africa 200,000 jobs and $2 billion in income”.

He stated that very soon, the annual closed fishing season is expected to be announced by the Ministry of Agriculture.
This strategy which is expected to boost the nurturing and development of the small pelagic fish stock in the shallow waters of Ghana does not also benefit the artisanal fishermen.

He said while the local fishermen observe this ban with religious fanaticism, Chinese trawlers engage in bottom trawl fishery to deplete the fish stock with impunity! Adding that it is high time Government did something about this to salvage the local economy.

He further stated that the development challenge facing the Stool is the failure of Businesses Enterprises and Educational Institutions operating on Teshie land to fulfil their corporate social responsibility and protocol employment opportunities to the people of Teshie.

“How come that the Kofi Annan International Peacekeeping and Training Centre which stands on Teshie Land without the payment of any compensation whatsoever is not offering scholarships to qualified youth of Teshie.

He said the KAIPTC has turned a blind eye to the festering chieftaincy conflicts in Teshie without providing any intervention in terms of peace advocacy and conflict resolutions programmes for the Chiefs and People of Teshie. He said Teshie is not represented on the Boards of Government Institutions and other Business concerns operating on Teshie lands.

He assured the people of Teshie that he will be working closely with the Teshie Mantse Palace to seek urgent solutions to these major challenges as the Divisional Chief of the Lenshie and Dzasetse of the Teshie Paramount Stool.