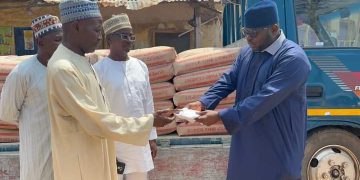 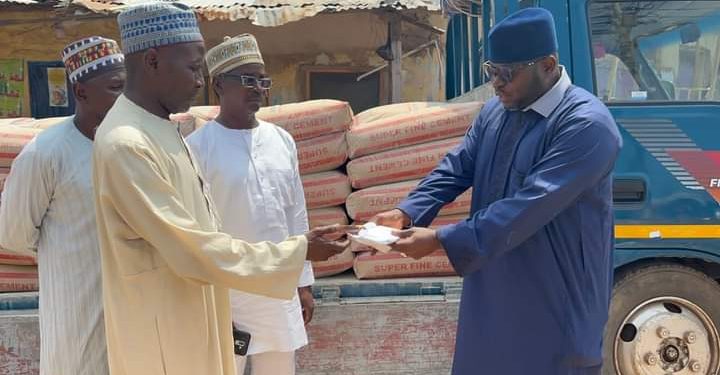 The Greater Accra Hausa Chief’s Palace under the leadership of Sarki, Alhaji Mohammedu Kabiru Kadiri English has presented 100 bags of cement and an amount of 5,000 Ghana Cedis to the Family of Musah Abokin Ango as their contribution towards the construction of a Mosque in Sabon Zongo a suburb of Accra.

The donation of the building materials and the cash forms part of the Palace’s annual Sadaka (gift) within the Zongo Communities in Ghana.

The construction of the mosque has been supported by many individuals and philanthropists.

Representing the Masarautan Hausawa Ankara, the Commander In-Chief of the Zongo communities, Wazir Alhaji Sanusi Ali Ahmed reiterated that the Palace support towards the construction of the Mosque forms part of the dream of the Greater Accra Hausa Chief which is to see the progress and development of Zongo communities in the country.

He added that history has revealed that the Greater Accra Hausa Chief’s Palace has a cordial relationship with Dr. Musah Abokin Ango and the donation will as well strengthen the relationship between the two sides.

According to him, the Palace through its cabinet members has supported the various Zongo communities in a number of areas such as education, health among others.
He noted that other measures have also been undertaken to improve the living standards of the youth and the aged.

He revealed that the Palace has supported other communities with similar donations over the years and will continue to extend its support to other Zongo communities to enhance development.

The Waziri of the Greater Accra Hausa Chief stated that the palace in collaboration with a Non-governmental Organization have selected Schools from four communities namely Zangon Tuta, Kwashieman, Darkuman and Fadama and taken upon themselves to support 10 pupils from each school from age 4 to 14 years with rice, oil, canned fish, spaghetti among others every month.

He said those ten pupils were also provided with exercise books, pens and pencils, mathematical sets and other learning materials.

Waziri Alhaji Senusi Ali Ahmed further revealed that this initiative has been going on for three years now and will continue to render their support to the schools.

He said the Palace few months back extended its support to some schools by providing them with large waste bins to help control sanitation in those schools.

He added that the Greater Accra Hausa palace will ensure that the Zongo communities continue to be a better place for all irrespective of religious differences as well as to render untainted support to help bring growth into those communities.

He added that the Palace as part of its efforts to support the needy within the Zongo Communities especially during the Holy month of Ramadan presented bags of rice, oil, tea bags, milk and sugar to Chiefs from various Zongo Communities which were distributed to the needy in their communities.

According to him, the Palace during Eid-ul-fitir celebration also presented food to some selected police stations in the Greater Accra as their Sallah package to the police and the inmates in their custody adding that they also presented about 1000 packs of rice and stew to the Ga community.

The Abokin family commended the Greater Accra Hausa Chief and his cabinet members for their kindness and prayed that Allah would help the palace to grow bigger to provide more for Muslim communities in Ghana.

Waziri Alhaji Sanusi Ahmed was accompanied by Dereni of the Palace, Alhaji Ali Gado and supported by Alhaji Angua Karki the Shamaki of the Waziri.