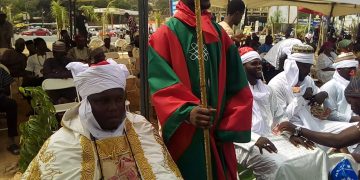 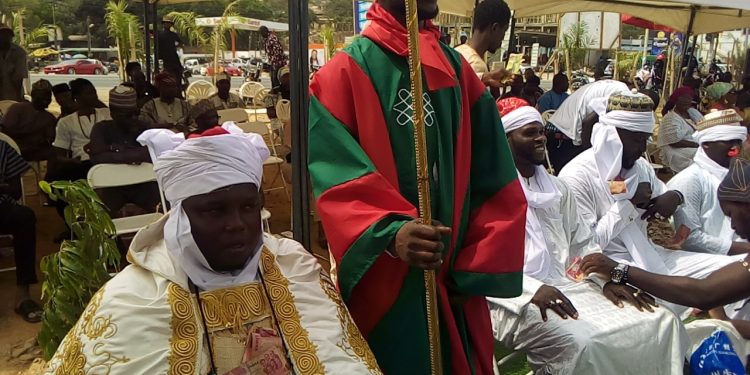 A philanthropist, Sarki Abubakar Sidik has been installed as the Hausa Chief of Lafaa Ngleshie to steer the affairs of Hausa Communities in the area. The Installation was under the leadership of Hausa Chief of Nima and superintendent Nii Ayi Okufobour, Ngleshie Alata Lafaa Berima Mantse I, Mallam Imrana Adamu Bako the Marafa represented Chief Yahya Hamisu Bak, the of Greater Accra Zongo Chief and some elders from the Muslim Community in Accra and beyond.

The Installation of the newly Hausa Chief saw the attendance of prominent Muslim personalities, leadership of the community’s traditional leaders and well-wishers. The colourful occasion took place at the forecourt of the palace of Nii Ayi Okufobour on Sunday, March 27th 2022. The Special guest of honor of the occasion, Sheikh Yayaha Amin the Khalifa of Ghana and the founder of the Islamic Foundation for Peace and Development congratulated the new Hausa Chief and urged him to use his position as the Hausa Chief to help develop the area. He urged him to collaborate with his cabinet and elders of Lafaa Ngleshie and Chief of Ngleshie Alata Lafaa to ensure that the area got the maximum development it deserves.

According to him, a Chief could succeed when he respect his subjects and therefore cautioned him against discrimination. Sheikh Yahaya Amin urged the newly installed Chief to continue with the support he has been giving to the people and called on him to consider everybody as a brother or sister irrespective of where the person was coming from and respect each person’s view.

On his part, the Chief of Ngleshie Alata Lafaa Berima Mantse, called on the newly installed Chief and his cabinet to ensure unity and tranquility within their area of rule. He further called on them to respect their older Chiefs and the Zongo Chiefs who steer the affairs of the Zongo communities and urged them to see themselves as one people with a common destiny. He called on them to forge ahead with unity and join forces to fight a common goal of more development in the Zongo Communities.

The newly installed Hausa Chief of Ngleshie Lafaa, Sarki Abubakar Sidik in an interview revealed that his topmost priority is peace unity, stability and job creation for the good people of Lafaa; adding that his palace will ensure job creation among the youth which will help them to more productive and useful to the society. He further revealed that he has already been supporting his community and his current position will motivate him to do even more.

He urged the youth in Ngleshie Lafaa community to desist from any form of violence rather engage in a productive venture that will bring peace and development to the area.