Who Is Kevin Taylor?; the other side of the journalist you never knew

Who Is Kevin Taylor?; the other side of the journalist you never knew

by Efo Korsi Senyo | Executive Editor
in Features
A A
0

In 2012, he founded Loud Silence Media in Accra. Loud Silence is a production house specialising in human interest stories for local and international viewing.

He is the host of With All Due Respect – a show published on mainly Facebook and Youtube that has gain a huge following and making impacts in the political and governance space in Ghana.

For him, he has a responsibility to the state of Ghana to expose all elements especially government official and members of his party – the ruling New Patriotic Party (NPP) who actions and inaction threatens the development of Ghana.

The show, usually in stronger words he say is the way “speaking the truth to power”.

Like many other journalists and personalities who face series of verbal or physical attacks for criticizing the current President Akufo-Addo led NPP government, Kevin Taylor has not escaped from those whose axes are sharp and up waiting for the next critics to chop into pieces.

Mr. Kennedy Ohene Agyapong, a very wealthy business man who is the incumbent NPP Member of Parliament for Assin Central descended heavily on the journalist with his axes choping the journalist far into the life of his [Kevin Taylor] mother and father with very personal and unpleasant words to describe the parents who have no direct link to the words of Mr. Taylor.

It was followed by allegations that Kevin is being paid by former President John Mahama to destroy the ruling NPP.

He was forced the journalist to tell Ghana’s his journalistic works from 2012 to 2016 when President John Mahama was in power.

Like the saying does, If you don’t learn to tell your own story, you give the chance others to tell your story their own way despite they know little about your story.

Kevin, has release a latest video to showcase his past journalistic works that he said contributed to helping make the then John Mahama lef NDC government unpopular.

These you never knew about him – the Melcom disaster, galamsey, oil industry related in Takoradi, Weija floor issues stories…. Please watch the video for yourself. 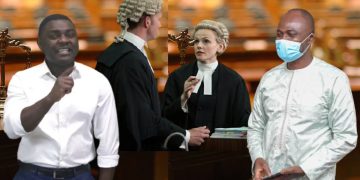