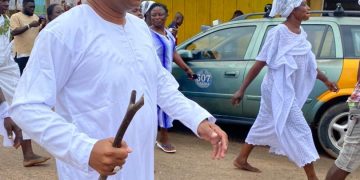 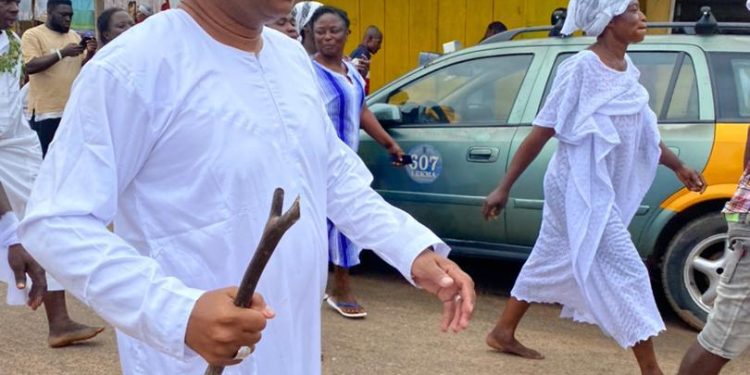 The Sempe Muslim Akwashongtse, Nii Adotey Odaawulu I, on Sunday joined the people of Nungua to mark the annual Abele (sacred corn) a pre-Homowo rite to usher in the celebrations of the Homowo festival celebrated across the entire Ga state.

The journey of Adeayebii Abele sacred corn saw the Sempe Muslim Akwashongtse moving to Oyibi for Sacred corn and walk back to Nungua for the start of the celebration of the annual festival.

The performance of the Abele sacred corn rite clears the way for other rites to be performed to mark the Homowo festival.

The Adeayebii is wrapped in a special white calico and placed on the head of a young man who has been purified and prepared for the journey.

Once the Adaeyebi is placed on the head of the carrier, no one dare touch it, not even the carrier, except the Gborbu Wulomo Shitse who receives it when the carrier finally gets to Nungua.

Upon the arrival of the pilgrims, the Gborbu Wulomo welcomed the Sempe Muslim Akwashongtse with water as a sign of good work done. 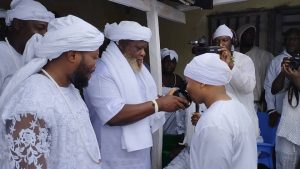 The Sempe Muslim Akwashongtse called on the public not to see the festivities as fetish but rather something that existed before the arrival of other religious groups.

His participation in the annual rituals of the people of Nungua, he said is as a result of the relationship that existed between the Ga Mashie and the people of Nungua which dates back to the days of Nuumo Larkote Aduwawushie and Nuumo Borketey Lawerh who were the first Gas to land on that part of the land.

According to him, as a proud son of the GaDangme land, he believes there is future for the youth if only the leaders take education seriously.

Nii Adotey Odaawulu I, in brief History about the Abele (Sacred Corn) revealed that the people of Ga (Nungua) embarked on pilgrimage annually from Antrayie (Oyibi) to Nungua to bring home the Adaeyebi, which is the first harvested sacred corn, to the Gborbu Wulomo, Shitse. 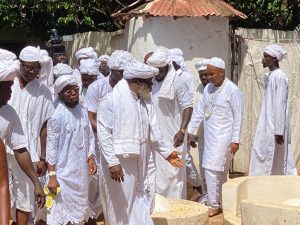 The historic journey he said formed part of the annual Nungua Kplejoo Homowo festival rites adding that without it there would be no successful Kplejoo festival.

According to him the sacred corn is a generational variety which was procured from ancient Egypt.

He stated that the pilgrimage commemorates the period of famine in the surrounding lands of Egypt which necessitated the mass exodus of families, tribes and groups from far and near to the land of Egypt in search of grains.

He further revealed that the people of Ga also went to ancient Egypt in the search of grains to feed their families adding that the journey from Oyibi to Nungua is by foot since trekking was one of the commonest means of transport at the time. 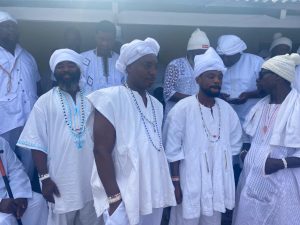