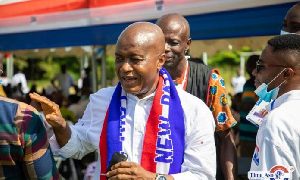 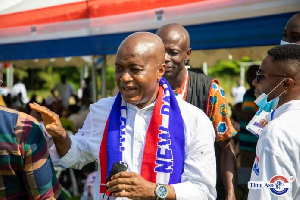 The ruling New Patriotic Party (NPP) goes to the polls to elect their national officers between 15th to 17th July 2022 at the National Capital, Accra.

Mr. Kwabena Frimpong, a communication team member of the NPP and an ardent youth activist, has appealed to the cherished delegates who would vote at the National Delegates Conference to vote for Mr Stephen Ayesu Ntim, who happens to be a former 1st Vice National Chairman of the NPP, 2001 – 2005 and has served the party in diverse capacities with excellent result delivery for the party.

The dynamic and vociferous party youth activist made these known on Days TV political show known as Outside Parliament which is hosted by Kwabena Agyei Ananse.

Mr Frimpong believes that going into the crucial 2024 elections, NPP needs a result-oriented Chairman to lead the party and break the 8. He unequivocally posited that “2024 is not going to be a walk in the park but would need leaders with experience and genuine track records in elections management to break the 8 for us.”

He further added that Stephen Ayesu Ntim has distinguished himself with all tasks that have been assigned to him by the party, thus, he said, “in 2004, Mr Ntim led the vetting committee during the Parliamentary primaries and through tact and diplomacy, resolved all controversy that could have caused grievances leading to loss of seat. In that election, NPP increased its parliament seats from 100 to 128 and it is very unfortunate and woeful to note that since Mr Ntim’s Exit, the NPP has not been able to increase the seat in parliament while in government.

Mr. Frimpong again indicated that, “when Chairman Ntim was tasked with the Settler Communities project in 2016, he won over 15 PRO-NDC seats that NPP has never won before like Atebubu-Amantine, New Edubiase, Techiman South, Krachi East, Dormaa West, Sefwi Wiaswo, Sefwi Akomtombra, et al and NPP improved massively in all settler constituencies across the country.”

Mr. Frimpong elaborated on how essential the 2024 election will be in deciding the future of the NPP. He therefore strongly believes that heading into the crucial 2024 election, it is of no doubt that the NPP needs a National Chairman who has a proven track record of leading a team that can convincingly produce good impacts to break the 8. He therefore calls on all delegates to look into the future of the party in casting their votes as he strongly recommend Chairman ayebida Stephen Ayesu Ntim for the position of National Chairman of the NPP.