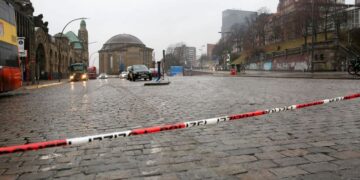 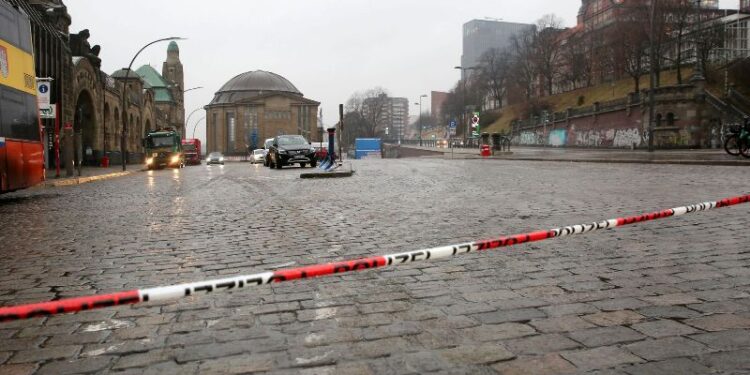 The square in front of Hamburg's St. Pauli Landungsbruecken is closed off for safety reasons. More than 200 road accidents and falls have been recorded in Hamburg because of the black ice. Photo: Bodo Marks/dpa

Large parts of Germany were under a severe weather warning on Monday, due to dangerous icy conditions across the country after storms struck following weeks of sub-zero conditions.

Operations are disrupted at Germany’s largest airport, causing cancellations and delays in Frankfurt, the facility’s operator said early on Monday.

About 180 of 1,100 take-offs and landings scheduled for Monday were cancelled, according to an airport spokesperson.

Passengers were asked to check online whether their flight was still scheduled to depart before travelling to the airport and to arrive for check-in as early as possible.

Operations had not been halted completely, but currently fewer planes than usual were allowed to land, as the airport’s north-western runway was closed in the morning, the spokesperson said.

Work was under way to de-ice runways and planes.

Further flights were cancelled at other German airports.

Germany’s rail network was also disrupted for a time by the weather for several hours earlier on Monday, said Deutsche Bahn, with many trains forced to operate at slower speeds.

Later in the day, the rail operator tweeted that long-distance trains were once again travelling at full speed again.

There were several car accidents across the country, including a bus which crashed into a tree near Frankfurt after veering off a slippery road.

The bus driver and 15 passengers aged between 15 and 50 suffered minor injuries.

In the northern city of Hamburg alone, there were more than 200 road accidents and falls on Monday morning, according to the fire brigade.

As a precaution, many schools, Christmas markets and zoos reportedly closed across the country.

In the southern region of Baden-Württemberg, which was already hit with icy conditions last week, further storms were expected.

In the capital of Berlin, and the surrounding Brandenburg region, the freezing rain was expected to hit by midday. 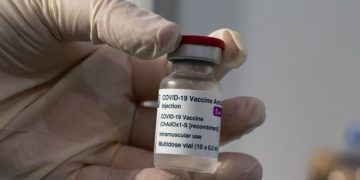 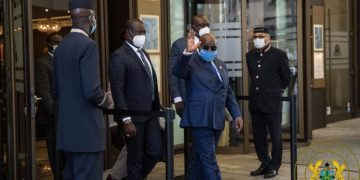 Abronye DC is a liar; I’ve not rented apartment for Joyce Dzidzor in Germany – Mahama