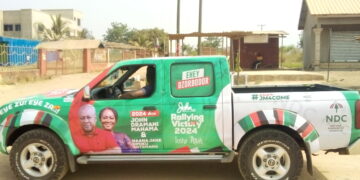 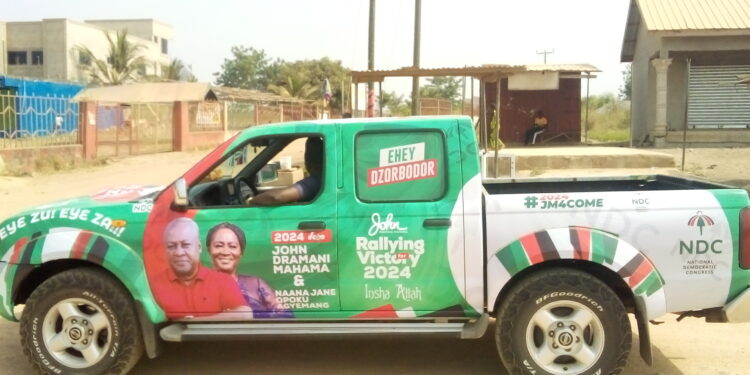 Hon. Alhaji Baba Lamin Abu Sadat, has kick start his campaign for the National Democratic Congress NDC ahead of the 2024 General election.

The staward after his defeat at the just ended NDC delegates Congress has branded his Nissan pickup Vehicle with the pictures of the former President John Dramani Mahama and his 2020 running mate Madam Jane Naana Opoku Agyemang to drum home his readiness to campaign for John Mahama and the the party victory come 2024.

The NDC branded Nissan Pickup was spotted around Kosoa, Nyanyano, Bodwase and it environs.
The team was cheered on by drivers, passengers, passers-by as well as vendors who were shouting the NDC slogan ‘Edey bee keke’. 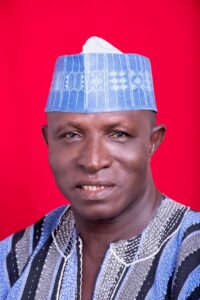 In an interview with some of the passers-by and vendors along the shoulders of the road, they stated that anytime Alhaji Baba Lamin passes by with the branded NDC vehicle, they the traders heave a sigh of relief and hope that very soon the current state of the country will change for the better.

According to them, the NDC has remained the only source of hope for Ghanaians and called on the leadership of the party to be more vigilant in the upcoming Presidential and Parliamentary Elections to prevent the ruling New Patriotic Party from rigging the election.

They added that the enthusiasm and energy with which the NPP leaders are shouting ” break the eight ” despite the unprecedented economic hardship and poor performance should tell you how prepared they are to rig the election to go for another 4 years to burden Ghanaians.

According to them some utterances and actions of the President shows that he did not win the election through the mandate of the people but the NDC failed to prove it in court.

The traders expressed the hope that John Mahama been tried and tested will use his experience to turn misfortune of the country around.