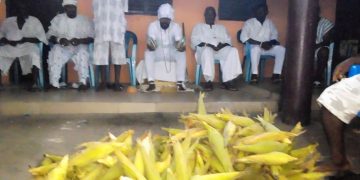 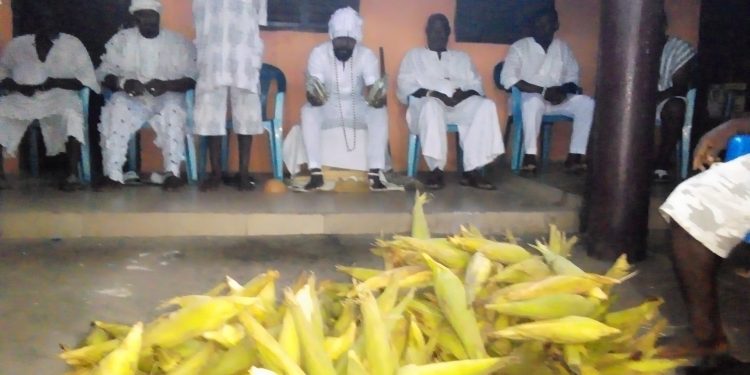 The Osabu Ayiku Wulomo of Teshie, Nuumo Adjei Sankuma III and his principal elders has on Sunday June 12, 2022 performed the Abele kuu (sacred corn rites) as part of the pre-Homowo customary activities to seek the blessings of the ancestors for the main Homowo Festival for the year.

The people of Teshie are renowned for their known rich tradition and culture since time inmemorial which they cherish and uphold with all their might and spirit.

The Abele kuu (sacred corn rites) is performed at dawn a couple of weeks after the bloahejuu rites to clear the way for other rituals to be performed before the Teshie Homowo.

The Abele kuu rites begins with the pouring of libation by the Osabu Ayiku Wulomo to seek for blessing and guidance from the ancestral spirits.

He also prays for peace and unity among the people of Teshie and for a successful and peaceful Homowo this year.

The Abele kuu rites, which is usually performed at the Teshie shrine was this year performed at the Nii Adjei Sankuma We because the mandatory customary rites that will weed-off the spirit of the late Nuumo Adjei Kwaako II from the Osabu-Ayiku Shrine have not been completed and therefore it is a taboo to enter the Shrine to perform any Homowo Rites.

Before the commencement of the sacre corn rites, the principal elders from various families came and gather at Nii Adjei Sankuma We. The ceremony started with the sanctification of the place with “nmatswi” local incense comprising dried palm-tree flowers sheaths placed at two main entranced of Nii Adjei Sankuma We.

After the pouring of libation, the Wulomo hangs two corn at the main entrance to the house and at a gate of the Shrine room as a goodwill gesture to the deities for abundant rains and bounty harvest.

The heap of corn is then sorted and shared among the various family heads and participants from the 5 Divisions of Teshie namely
Lenshie We, Agbawe We, Krobo, Kle Musuŋ and Gbuglah.

At the end of the ceremony Nuumo Adjei Sankuma lll prayed to the gods to lead each and everyone who partipated in the rites to their various destinations safely.