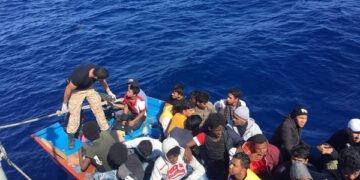 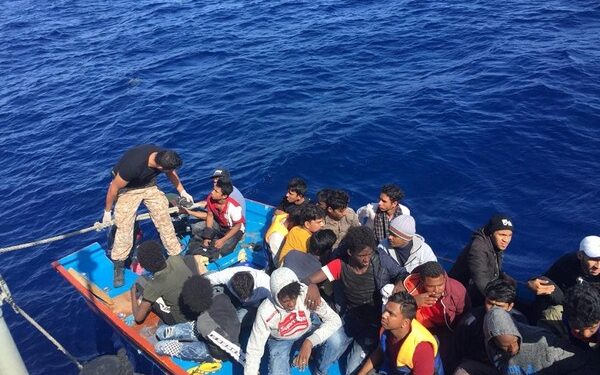 Migrants are seen in a dinghy as they are rescued by Libyan coast guards in the Mediterranean Sea off the coast of Libya, October 18, 2019. Picture taken October 18, 2019. REUTERS/Libyan Coast Guard/Handout via REUTERS ATTENTION EDITORS - THIS IMAGE WAS PROVIDED BY A THIRD PARTY. - RC19B7903B10

Just one month after a migration-related scandal in Sicily, a humanitarian aid ship with rescued migrants on board has again docked in an Italian port.

The private German ship, the Louise Michel, was permitted to dock on the southern Italian island of Lampedusa on Thursday night, and the 33 Egyptians rescued from the Mediterranean were allowed to disembark.

There were no further details from the organization or the Italian Interior Ministry.

The German rescue ship Humanity 1 with 261 migrants on board, and the Doctors Without Borders (MSF) Geo Barents ship with 250 migrants were also waiting for a safe harbour to become available.

A confrontation between sea rescuers and the far-right Italian government took place in early November, when Rome banned the Humanity 1 and Geo Barents from entering its waters.

The ships were eventually permitted into the Sicilian harbour of Catania, but only the sick, women and children were allowed to disembark.

After two days, health authorities in Catania ordered for the remaining people on board to be able to disembark.

Italy did not permit the Ocean Viking ship to enter any of its ports, forcing it to continue to France.

Diplomatic relations between Rome and Paris have been strained since then.