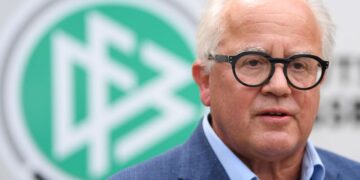 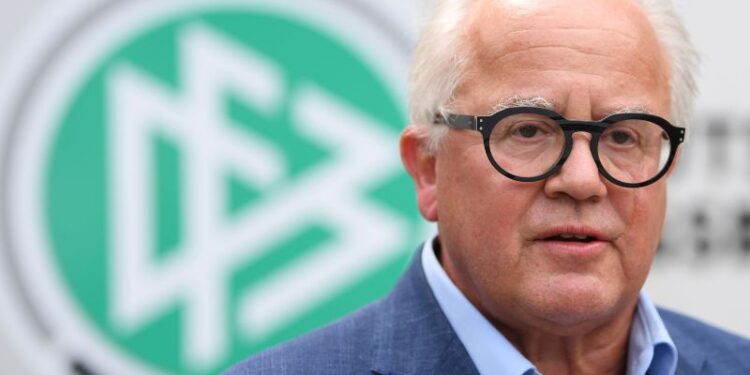 FILED - Fritz Keller, then president of the German football federation (DFB), speaks to journalists outside DFB headquarters. Former German football federation (DFB) president Fritz Keller criticized the discussions over the One Love captain's armband and said that was one of the main reasons for Germany's early exit from the World Cup in Qatar. Photo: Arne Dedert/dpa

Former German football federation (DFB) president Fritz Keller criticized the discussions over the One Love captain’s armband and said that was one of the main reasons for Germany’s early exit from the World Cup in Qatar.

Politicians and other DFB officials “persuaded the team to take action, to wear the One Love armband,” Keller told an interview with the Stuttgarter Zeitung newspaper published on Friday.

“The team was in disagreement, the captain and the team council were pushed to do it. Then there were discussions about things that have nothing to do with sport,” he said.

Germany were among nations that planned to wear a multi-coloured armband in a sign for equality and diversity during the tournament in Qatar, a country widely criticized for its human rights situation and its handling of the LGBTQ+ community.

But they backed down after ruling body FIFA threatened financial and sporting sanctions. Instead, the Germany players covered their mouths during the official team photo before their opening game against Japan.

Keller, who led the DFB from 2019 to 2021, also praised Oliver Biefhoff, who this week resigned from his position as director at the organization.

“He was one of the few who didn’t just hide behind his position, but also took responsibility. For 18 years, he tried to bring change into youth football, but that was prevented because many wanted to make a business out of it,” he said.

Keller resigned from his position at the DFB in May 2021 amid a scandal caused by a Nazi reference he made towards then vice president Rainer Koch at a meeting.