Dela writes: I live in a pounds sterling economy but Ghana is HARD.

Dela writes: I live in a pounds sterling economy but Ghana is HARD.

From when I first came home to now, prices have doubled and unbelievably tripled in some cases. Most have risen by more than 50%. Petrol was less than 5.80gh cedis a litre when I first arrived but it is almost 11gh cedis now. In fact, one of my friends from the US saw me buy fuel the other day and decided to compare prices. He was shocked that fuel is more expensive in Ghana than the US. How? A country where people earn less than 10% of how much people earn in the US? Are you getting my point?

Bread in my neighborhood in Keta was 1gh cedi before I recently traveled. I found out on my return that it is now 3gh cedis. Imagine a family of 6, mother, father and four kids trying to make breakfast in the morning. How much is their parents’ salary? Would it be able to afford such a costly breakfast every morning or they would be forced to skip breakfast from now on? I want you to see the picture as clearly as possible especially if you are a supporter of the looting and mismanagement going on. Because what blessing or enjoyment is in the stealing that is being done when other Ghanaians are clearly suffering so much?

Cement was somewhere 28gh cedis. Then it became 36gh cedis. Now, it is 55gh cedis. How much would building one tiny place for your family cost now? Would it not reflect in rent? Rent is already expensive as it is. Landlords invest so much into building and therefore turn around to demand 1 – 2 years advance payment. Would the majority of Ghanaians be able to afford a place to lay their heads? No.

Sometimes, I wish I was a leader. My tiny mind seems to think I will do better. And if I ever become one, it is likely I will do well. I am not the type who makes it a duty to steal from people who are struggling (do I even steal from anyone?). I took a mentorship course about 5 years ago. In that training, we were tught over and over again that when good people remain outside politics, things worsen. Although I disagreed at the time – mainly because I believed I knew what happens to good people when they join a bunch of thieves that see them as threat to their stealing – I am now starting to believe that a few good nuts could actually make a change.

Personally, I don’t understand how anyone could sleep at night when they know they have mismanaged the affairs of millions of people and rendered their lives dangerously unsafe. Yes, unsafe. That is what it is when many people in a country can’t afford food, shelter, and medical care. This is precisely why I am surprised when the robbers in charge of affairs of the country say things are not hard. But can you blame them? Their stomachs and that of their family members and friends are full. Why would they complain of hardship? 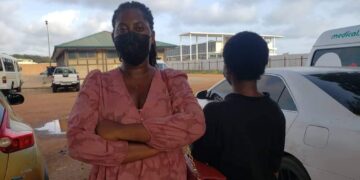 Dela Goldheart writes: Prof. Gyampo Consistently Harassed Me When I was His Student